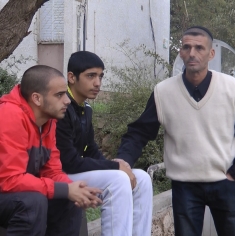 In this documentary mosaic of a continued social disintegration, seven filmmakers bring to the screen protagonists and stories that live in an abyss of despair, in the chasm between those who have and those who do not.An old man rummaging for food in bins; a father who cannot give water to his infant daughter because he’s been cut off; an overcrowded ER that cannot cope under the pressure; a man who nearly buys an expensive Lexus and may yet decide to buy a Mercedes; a realtor in a well-fenced villa; and a mother sitting in a small crowded house with a hungry baby in one arm and a canister of gas in the other.