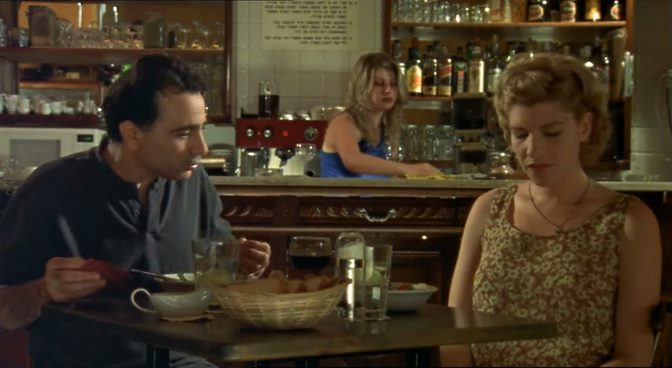 A slice of life, day after day, in Haifa, where Moshe and Didi’s marriage is on the rocks, Moshe’s affair with his mistress is going downhill, and his angst about health, his parents, sex, communication, and business dominate his life. He has many problems, to say the least: Moshe’s mother is Jewish and his father is an Arab who may or may not sell ancestral land; his wife and mistress have lovers, one of whom is a close friend; much of Moshe’s surroundings seem under construction or in renovation. As he becomes entangled in his confusing family relations and divided ancestry, he finds himself put to the test in ways that change his ordinary existence into something far more complicated.


Lighted by...sparks of formal bravado that recall the old radicalism of the French New Wave."


"A darkly comic tale. Gitai's genius is to show the conflict infiltrating every encounter, from the market place to the bedroom." - Leslie Camhi,


"An offbeat, grimly funny look at the gradual wreckage of a man's life." - George Robinson,