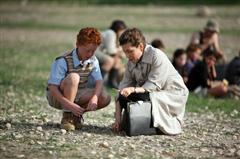 Amos Gitai’s new film is carefully composed and orchestrated, highly self-aware and sculpted from both collective and personal memories, encapsulating the contradictions and complexities inherent to Israel and its history.
Using Jeanne Moreau’s voice as a kind of chorus – she recites texts and poems in voice-over – Gitai creates a kaleidoscope of images and associations from the distant Jewish past and the immediate Israeli present. Among the first images we see are centuries-old battles between Romans and Hebrews for the town of Jerusalem. We are then transported to the present at an Israeli army encampment, where Gitai himself laments the “half truths and half lies” on television and the “endless war” that his son is now engaged in fighting.
As if in counterpoint to these ancient and modern wars, he introduces memories of his mother through letters, sounds and anecdotes, a mother who spent much of the sixties in London, learning English and attending plays.
Carmel’s sequences and incidents, though they are all carefully selected, are not designed to construct a linear narrative. It is as if order is not possible in the world he sees around him. Chaos is far more illuminating, be it in the glorious music of Gustav Mahler that bursts through the claustrophobic reality of people engaged in war or in an account of Gitai’s personal exploits as a soldier shot down in a helicopter during the Yom Kippur War.