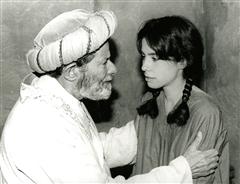 Based on a true story, Braids tells the tale of So’ad, 14 year old Jewish girl imprisoned by the Iraqi government in 1947 for her participation in the Zionist movement. This feature film illuminates a complex and sensitive period of Jewish life in Iraq when Jews felt their security threatened as antisemitism surfaced with the growth of Zionism. Jailed for 3 years, So’ad joined other political prisoners in a campaign of civil disobedience until Iraq opened its gates in 1950 and allowed Jews to emigrate to Israel.