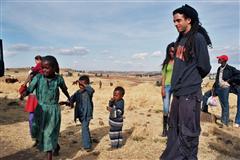 Tomer Heymann followed Israeli pop/world-beat band The Idan Raichel on their 2006 concert tour to Ethiopia and emerged with a documentary that rollicks and rocks. The film, part lighthearted road trip, part examination of multiculturalism in Israel, is a close-up ride with the young Israeli-Ethiopian-Yemenite band members, who muse on the loss of their heritage and on their excitement as tourists embracing roots in Africa. Black Over White deftly explores their cultural ambivalence and their experience of racism back home in Israel. One of the musicians is reunited with his grandmother in Addis, music is made with rural villagers and in urban clubs, and in one poignant sequence, future immigrants to Israel meet the musicians. The culminating concert-a fusion of Middle Eastern multiethnic grooves- is a success and emotional high point, but for the band members, the meaning of home remains elusive.