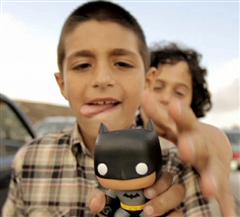 Batman at the Checkpoint

An Israeli car and a Palestinian car are stuck in traffic in front of a barricade at the entrance of Jerusalem, coming from the Dead Sea. Yuval and Mahmoud, both seven years old boys, find it’s much more fun to pass the time playing with one another. But when Mahmoud’s father tries to cut into the other’s lane, Yuval’s father bumps into his car in an attempt to prevent him, and things start to get complicated. What began as a game becomes an outright battle over a plastic Batman doll.