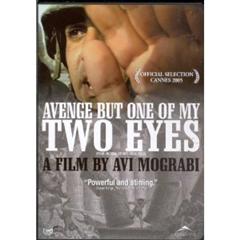 Avenge But One of My Two Eyes

A documentary on the treatment of Palestianians by members of the Israeli army. From the Myths of Samson and Massada, the youger Israeli generations learn that death is preferable to domination. Today, as the second Intifada is raging, the Palesinians are constantly humiliated by the Israeli army, peasants are kept from ploughing their fields, children on their way back from school are stranded at checkpoints for hours, an old woman can’t even go back home. Echausted, these people voice their anger and despair, just as the Jews did with the Romans or Samson with the Philistines. Israeli filmaker Avi Mograbi still believes in the power of dialogue, with besieged Palestinians, and omnipresent Israeli army officials.