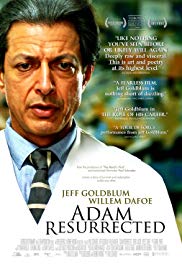 “Adam Resurrected” follows the story of Adam Stein, a charismatic patient at a mental institution for Holocaust survivors in Israel, 1961. He reads minds and confounds his doctors, lead by Nathan Gross. Before the war, in Berlin, Adam was an entertainer–cabaret impresario, circus owner, magician, musician–loved by audiences and Nazis alike until he finds himself in a concentration camp, confronted by Commandant Klein. Adam survives the camp by becoming the Commandant’s “dog”, entertaining him while his wife and daughter are sent off to die. Years later we find him at the Institute. One day, Adam smells something, hears a sound. “Who brought a dog in here?” he asks Gross. Gross denies there is a dog but Adam finds him–a young boy raised in a basement on a chain. Adam and the boy see and recognize each other as dogs–and their journey begins. “Adam Resurrected” is the story of a man who once was a dog who meets a dog who once was a boy.

Watch on other platforms:
Amazon PrimeVudu

This is a thought provoking movie. The acting of Jeff Goldblum is just outstanding. Willem Dafoe as usual is one great actor as well.

This is a serious movie and an introspection in self. It is not a war oriented movie but a sad story about a man who is so misunderstood by his family and the world. Is he really wrong ? you will undergo the journey in this man’s shoes. Not a hero but a survivor who survived by being a dog, a gifted one who did all he can to survive… was it fear of losing his life that he obeyed his masters or is it a total surrender he adopted towards those who were committing atrocities. It is surrender of all self respect, dignity and ego as that of a perfect slave. Did Adam really regret what he did and why he did ? This movie does not judge the character but takes you on a journey, a journey of introspection of someone you never want to be but may admire.