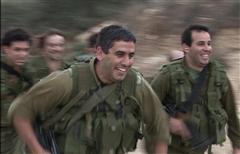 A Nation in Reserve

“A nation in Reserve” is a documentary series following a group of Israelis who once a year make the harsh transitions from civilian to military life and back. The series tells the story of members of an elite reserve unit from the moment they receive their call-ups and until they return home. Through the lives of his protagonists, the series’ director tries to trace the disappearing spirit of solidarity that once defined being an Israeli.