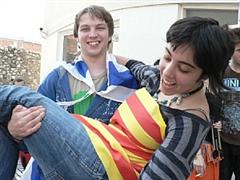 A year after seventeen-year-old Yuval leaves Israel to attend an international high-school, situated on what used to be the frontline between the Croatians and the Bosnians during the civil war in Mostar, Bosnia-Herzegovina, filmmaker David Fisher, his father, follows. During three roundtrips to Mostar, Yuval’s relationships unfold: with his father, his Israeli peers, and his Spanish girlfriend, Neus. Although Yuval is far from home, the distance actually brings father and son closer together. Through a series of talks, the camera reveals great honesty and maturity, but also moments of tension and clashes. Salam, Yuval’s roommate, an Israeli Arab, is a “playboy” and a charmer. No wonder Yuval hands him a sugar cube, one morning after a bitter fight they have over the Israeli-Arab conflict. With them are other Israeli peers, who learn to open up to other cultures and change their perception of their neighbors. Yuval’s affair with Neus is heart-warming but doomed-because of his impending army service. This is during the 2009 Gaza War and Yuval voices his apprehension about the IDF. At the end of this journey we realize that two years in Mostar have prepared these youngsters for a challenging life as grownups.