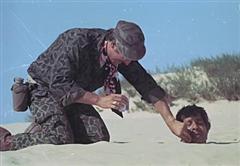 Sergeant Moked wants to marry Yaeli, but her tough father Mr. Hasson refuses until her older sister is married first. Moked also has to recruit to reserves a sleek Rumanian con man, Sergio Konstanza. In addition, Konstanza owes Hasson a lot of money after selling him a piece of land from the Mediterranean Sea. When Moked and Konstanza head to the military base in Sinai, Yaeli joins as a stowaway while Hasson, who wants his money back, goes after them.